Rome wasn’t built in a day 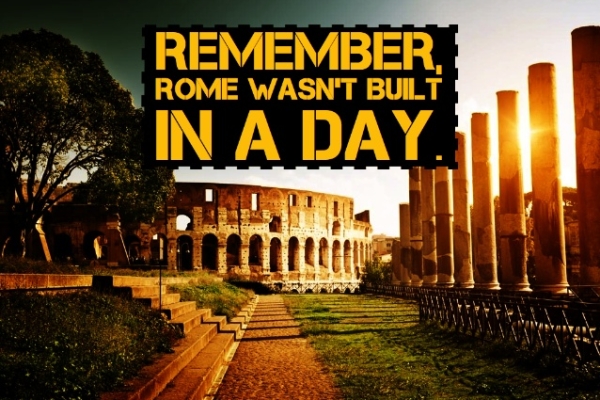 If you ask anyone what their biggest concerns are about losing weight, they would respond with the length of time it takes to get the weight off or the amount of dedication it takes. It goes to such extremes as weighing themselves every morning (sometimes as bad as more than once a day) and putting on their “skinny” pants after one good meal to see if there is more room in them. After one week of eating healthy and training hard, if the numbers do not reflect on the scale, and by numbers I mean drastic numbers, then most decide that it is time to throw in the towel. Now, most of you are wondering what I would know about this process considering I am a personal trainer and have always been considered an athlete.

NEWSFLASH: I have not only been in the obese category, but I struggled for years trying to get the excess weight off that I so generously put on in high school. That is until one day I realized that ROME WAS NOT BUILT IN A DAY!

We have been carrying around this excess weight for years, and now we expect it to disappear within one week!! The unfortunate thing is the weight that we have become accustom to on our body, has also become accustom to us! It will fight to stay on your body because it has been there for so long. So for your own sanity, enter into your training journey with the mindset that ROME WAS NOT BUILT IN A DAY!

We have been told by healthcare professionals that losing 1-2 lbs. is a healthy amount of weight to lose. However, when you add the numbers up they seem like very little. I mean if I weighed 258lb. at the start of my journey, after one month I could possibly only be 250lb. Now most of us would lose our minds at such a small change and very possibly give up. I am going to ask you to put down that cheeseburger or ice cream cone and consider how good those “measly” 8 lbs. are. Here is some simple math to help you get around how important those lost pounds will be in the end. After 4 weeks you will no longer have 8lbs on your body, after 8 weeks you will no longer have 16lbs., after 12 weeks 24lbs. will be gone, and after 16 weeks 32lbs will have disappeared. So in, let’s say March, you weighed 258lbs., by mid-June you will weigh you will weigh 226 lbs.!! By the end of September your first number will no longer be a 2, but now it will be a 1! Some of you are still sitting there with your glass of wine or sugar filled treat saying to yourself, “September seems a LONG ways away”. Well, it is.

BUT here is the GOOD NEWS: It took years putting all that weight on, and it will ONLY take you 7 months to get it off!

Each person has their own unique story and their own struggles, but the journey to being healthier will only start when you decide that each pound off of your body is another step towards the new you! Rome was not built in a day, so don’t think that your empire will be; be patient and be determined.